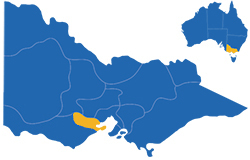 View map of Geelong & The Bellarine

Geelong is Victoria's second largest city, situated along the shoreline of Corio Bay. The city and its surrounding suburbs offer a wealth of attractions, shopping, multicultural dining and significant parkland along the bay foreshore and Barwon River.

Geelong is the gateway to the Bellarine Peninsula with its collection of towns fronting the sandy beaches of Port Phillip and the exhilarating ocean waters of Bass Strait. The Bellarine Peninsula is also an acclaimed food destination with its collection of wineries, breweries, farm gates and dining establishments. A car and passenger ferry links the historic maritime defence port of Queenscliff to Sorrento on the Mornington Peninsula.

To the north-west of Geelong is the Golden Plains Shire with its rolling hills, golden fields, volcanic plains, river valleys and rugged bush. There are award-winning wineries, fascinating natural scenery and welcoming country towns.

Visitor information centres in the
Geelong & The Bellarine region