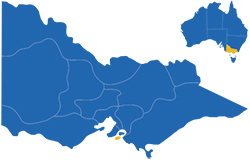 Phillip Island is a popular holiday destination, around 120 kilometres from Melbourne. The island's gateway is the fishing village of San Remo where a bridge links Phillip Island to the mainland. Ferry services also operate between Phillip Island and the Mornington Peninsula.

Phillip Island is around 24 kilometres long and 9 kilometres wide. Its first permanent settlement occurred in 1842 with pastoralists making use of the land and eventually fishing became a predominant industry. Tourism began to take off once ferry services were established to the mainland. A suspension bridge between San Remo and Newhaven was built in 1940 and later replaced by a concrete bridge in 1969.

Visitors come to Phillip Island for its swimming and surf beaches, unique wildlife and the famous penguins which make their epic journey along the beach at sunset.

The western tip of the island, known as The Nobbies, consists of rocky islands just off the coast which can be viewed from the surrounding boardwalks, and the famous Seal Rocks which is home to the largest colony of fur seals in Australia. The Nobbies Centre includes marine displays, a gift shop and dining facilities.

Cape Woolamai is at the south-eastern tip of the island and much of it is covered by a state fauna reserve with mutton bird rookeries and walking tracks along the coastal cliffs. The golden ocean beaches at Cape Woolamai are popular with surfers.

Other attractions at Phillip Island include the historic island farm of Churchill Island, a koala sanctuary and several theme parks.