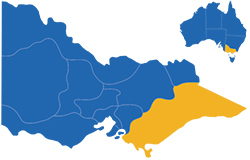 The Gippsland region stretches from Melbourne's eastern outskirts all the way to the state border with New South Wales in Victoria's far east.

This extensive and diverse geographical area is renowned for its natural beauty. Visitors will enjoy hundreds of kilometres of spectacular coastline, picturesque rivers and lakes, forests and snowfields.

South Gippsland is home to fishing villages, small seaside towns and pristine beaches. One of its major attractions is the Wilsons Promontory National Park, which consists of striking granite peaks and an array of local flora and fauna, forming the southern most tip of mainland Australia.

West Gippsland is characterised by lush, rolling hills and major dairy and farming industries. There is a varied collection of farms, vineyards, dairies and food outlets selling local produce and smallgoods where visitors can discover the many culinary delights of the region.

The Latrobe Valley, covering the area from Moe to Traralgon, is home to the state's massive power generation industry. North of the Latrobe Valley are several large lakes and the spectacular mountains of the Great Dividing Range including the snow resort of Mount Baw Baw.

In East Gippsland, visitors will find rugged forest terrain, unspoilt beaches, and abundant wildlife. The Gippsland Lakes, which extend from Sale to Lakes Entrance, is the largest inland waterway system in Australia, and with over a million hectares of public owned parks in the area, it is the ideal location for bushwalking and water activities. Sandy beaches, fresh seafood and waterway cruises are just a sample of the attractions on offer.