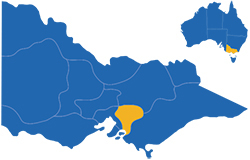 This region, located to the east of Melbourne, can be divided into two separate areas - the Dandenong Ranges, where Melbourne's leafy eastern suburbs meet the mountains and forests, and the Yarra Valley, Victoria's oldest wine region.

Located to the north-east of Melbourne, the Yarra Valley features over 80 vineyards set in picturesque rolling hills mainly around Lilydale, Coldstream, Yarra Glen, Healesville and Seville. The first vines were planted in 1838 at Yering Station and these days the Yarra Valley is recognised as one of Australia's chief cool climate producing regions. Many of the region's wineries have cellar doors offering wine sales and picnic facilities, with some of them also featuring restaurants, cafes and boutique accommodation, making them complete attractions within themselves.

In addition to vineyards, the Yarra Valley includes bush walking trails, fruit farms, markets, galleries and attractions for the whole family including the famous Healesville Sanctuary.

The Maroondah Highway north-east of Healesville passes through Black Spur which is noted for its spectacular tall trees and dense forests. Further on is Marysville where natural attractions abound at this gateway to the snow resort of Lake Mountain.

The Dandenong Ranges, also know as simply The Dandenongs, spans valleys and hills covered in thick temperate rainforest and dense ferny undergrowth. It is a bushwalking and cycling paradise with extensive trails through lush vegetation. From the peak of Mount Dandenong are panoramic views of the city, while the surrounding quaint villages offer boutique accommodation, excellent restaurants, unique shopping, galleries, markets, beautiful gardens, plant nurseries and day spas. The historic Puffing Billy steam train journeys between Belgrave and Gembrook, taking in the surrounding scenic landscapes. It's a change of scenery, less than an hour from Melbourne, in one of the most romantic areas of Victoria.