Road rules and regulations are strictly enforced in Victoria.

While road rules are generally consistent throughout Australia, there are a few minor differences in Victoria and some extra rules covering some unique features of Melbourne's roads.

U-turns are permitted at all traffic lights that control intersections unless signs advise otherwise. 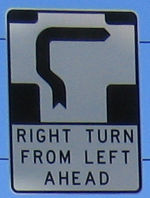 Hook turns are required when turning right at some intersections in Melbourne which have tram lines running along them. Their purpose is to improve traffic flow by removing turning traffic from the right lane where there is no space for a dedicated turning lane. For areas where trams share the right lane of the road, the use of hook turns also ensures trams going straight ahead are not held up by right turning vehicles.

Roads in Melbourne's CBD which have some hook turns:

Roads in South Melbourne which have some hook turns:

To perform a hook turn, move into the left lane when approaching the intersection and advance across the intersection, coming to a stop within the lane that is marked for right turning traffic. Ensure you activate your right indicator. Observe the traffic lights on your right, which is the road you are turning into. Only complete the right turn when they change to green, which will occur after the traffic lights change to red in the road you are currently on.

Melbourne and some of its suburbs have an extensive tram network. A few tram routes are off-road, but most are on-road, with some sharing lanes with vehicles.

A number of tram stops have either traffic islands or yellow safety zones with barriers that separate pedestrians from vehicles. At these stops, you do not need to give way to pedestrians entering and leaving trams.

Other tram stops are unprotected and you must give way to pedestrians entering and leaving a tram. When a tram is stopped and its doors are open, stop your vehicle at the rear of the tram, or if you are already beside the tram when the doors open, remain stationary. Once the tram's doors are closed and pedestrians are clear of the road, you can drive forward. If the tram remains stationary at a stop with its doors closed, the maximum speed at which you can pass that tram is 10 km/h.

If an emergency vehicle is stopped on the side of the road with its lights flashing, you must not exceed 40 km/h when driving past that vehicle. You can increase your speed once you are a safe distance from the incident. This rule does not apply if the incident is on the other side of a divided carriageway.

The emergency vehicles this rule applies to have red, blue or purple flashing lights. These lights are on police, ambulance, fire, SES, enforcement and transport safety vehicles.

Overseas visitors to Victoria are permitted to drive motor vehicles on the state's roads provided they have a current and valid overseas driver licence and they only driving vehicles of the same class that their licence was issued for. This driver licence must either be printed in the English language, otherwise an English translation of it must be provided. An acceptable translation of a non-English driver licence is an International Driving Permit (IDP) which most countries around the world can issue, however the IDP must be accompanied by the original licence.

Number plates are required to be displayed on a registered vehicle in order for it to be driven on public roads in Victoria.

An example of the current standard issue number plates for vehicles registered in Victoria is shown on the right. The format is two groups of one number followed by two letters. The slogan is "Victoria - The Education State".

Further details about number plates, including special interest and personalised versions, are available from the VicRoads number plate page.