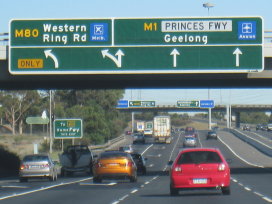 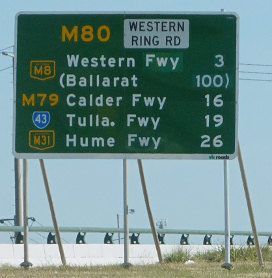 These roads are duplicated (dual carriageway) roadways with at least two lanes in each direction. The majority of these roadways are built to freeway standard, however some sections in rural areas are of highway standard with other roads intersecting them instead of interchanges.

In rural areas, they provide high standard links between Melbourne, other capital cities and major regional centres. Within Melbourne, they are urban freeways or tollways.

The CityLink sections of the M1 and M2, plus the EastLink section of the M3 are toll roads.

Many "M" roads in Melbourne have freeway exit numbers installed along them. This allows drivers unfamiliar with the area to easily identify exits rather than rely just on a road or suburb name. It also gives drivers a sense of how far to their required exit so they can plan lane changes well in advance.

Exit numbers increase sequentially as the distance from Melbourne's CBD increases. Exits are denoted by a number, except for those within about 15 kilometres of the city centre which have the number prefixed by the bearing of the exit in relation to the city, such as "E" for east or "W" for west. 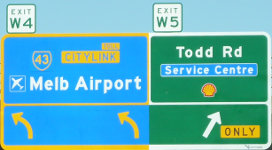 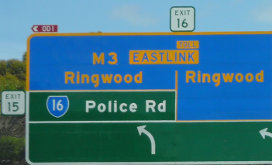 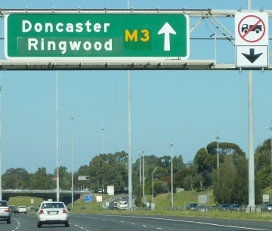 Trucks exceeding 4.5 tonnes of gross vehicle mass are banned from the furthermost right lane on a number of Victoria's freeways which carry 3 or more lanes of traffic. Buses and emergency vehicles are exempt from this ban.

Signage installed above lanes and along the median strip identify areas where this restriction applies. 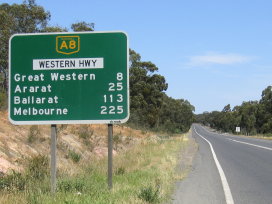 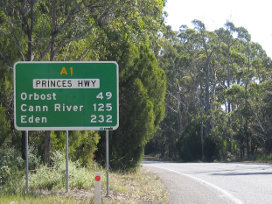 They have a similar function to "M" standard roads, but generally carry less traffic. In rural areas, they provide high standard links between Melbourne, other capital cities and between regional centres. In metropolitan areas they are major transport corridors.

"A" roads in regional Victoria:

"A" roads in Melbourne: 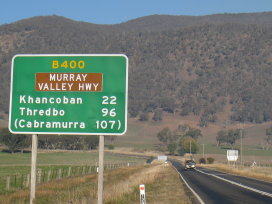 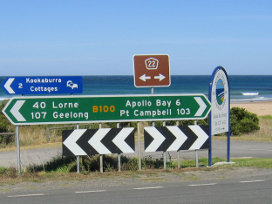 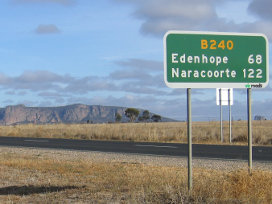 These roads are generally single carriageway roadways. They are sealed and are of a good standard.

They function as primary links between regions not served by "A" roads. In metropolitan areas of Melbourne they are secondary arterial roads. They also include the highly significant tourist routes of the Great Ocean Road, Murray Valley Highway and the Great Alpine Road.

"B" roads in regional Victoria:

"B" roads in Melbourne: 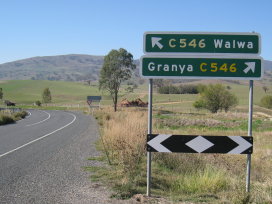 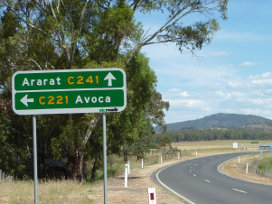 These roads are generally single carriageway roadways. Almost all of them are sealed and their standard is determined by usage and terrain.

They function as important links between population centres and also provide access links to the primary road network.

There are hundreds of "C" roads throughout Victoria. 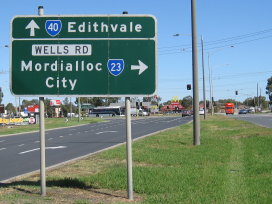 These roads are located within Melbourne's metropolitan area and generally define major transport routes to the city and through the suburbs.

These routes may vary in standard from single carriageway roads to multi-lane arterials and highways. 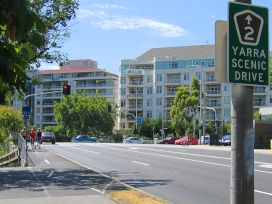 These are typically shorter routes that cover a number of roads and form a leisure tourist drive. These routes either pass through areas of noteworthy scenery, follow natural features or encompass tourist attractions.

As these routes are designed for tourists, they are not the quickest or most direct way to get between destinations.

There are many other tourist drives in regional Victoria, some without route numbers. Look out for brown road signs.