Historically, lighthouses were used to warn ships that they were approaching dangerous coastlines, shoals or reefs and were even used to guide pilots to a safe landing. Perched high on a cliff or amongst coastal rocks, they are one of the oldest known aids of maritime navigation.

Today, most nautical vehicles rely on electronic navigation devices, which has seen many historical lighthouses decommissioned and preserved as museums and tourist hubs.

Victoria has seen many shipwrecks along its expansive coastline, so it's no wonder that many grand lighthouses can be found dotted along its coast. 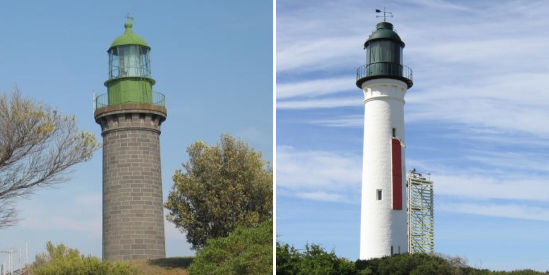 Queenscliff has been a prominent part of Australia's early maritime and defence history. There are two lighthouses in Queenscliff - the Black Lighthouse and the White Lighthouse - which are situated just 500 metres from each other near the entrance to Port Phillip.

Unique, striking and one of only a handful like it in the world, the Black Lighthouse at Fort Queenscliff is fashioned out of naturally black stone and is the only of its type in the Southern Hemisphere. The infamous Black Lighthouse was erected in 1843 and replaced a temporary sandstone lighthouse at the fort which was built to protect the entrance to Port Phillip.

The White Lighthouse is flanked by two steel navigational towers that to this day help to steer ships through the dangerous of The Rip and into Port Phillip. Built in 1862, it was constructed out of bluestone and sits at the tip of Shortlands Bluff. 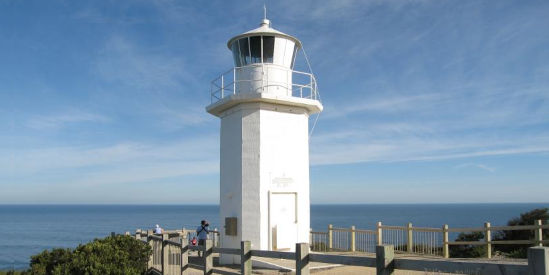 Navigating the treacherous Bass Strait was made easier by the Cape Liptrap Lighthouse, standing tall on the South Gippsland cliffs south of Walkerville since 1913.

The original lighthouse was fashioned out of steel, standing 2.1 metres high with an acetylene lamp. In 1951 the original structure was covered with cast concrete and converted to electricity in 1970. Its unique octagonal shape often draws interested visitors from far and wide. 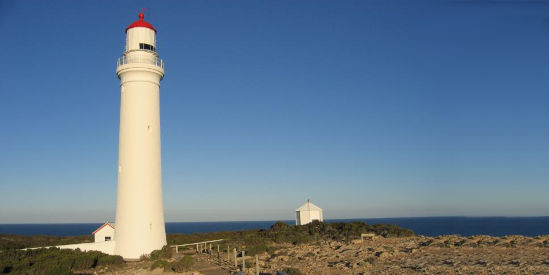 Distinctively painted in red and white, the Cape Nelson Lighthouse has been well known for its individual character since its construction in 1884, primarily from local bluestone. 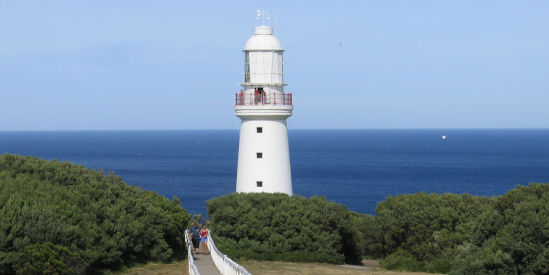 Balanced on the towering cliffs above the Bass Strait and just a short distance from some of the most fascinating forests of Victoria, the lighthouse at Cape Otway is the oldest lighthouse on Australia's mainland.

Cape Otway was the first sight seen by many decades of immigrants who made the long sea trek to Australia. The lighthouse was first erected in 1848 and has been in operation continuously ever since. 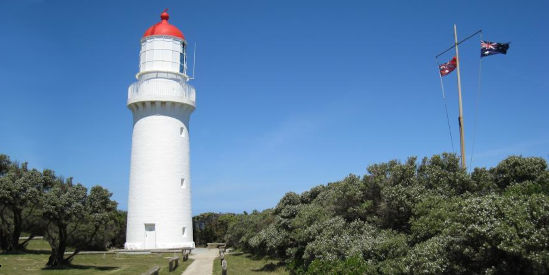 Those venturing in the surrounds of the Mornington Peninsula National Park should not miss a trip to the lookouts of Cape Schanck which surround the grand old lighthouse built in 1859.

Cape Schanck Lighthouse was the fourth lightstation built in Victoria and is renowned for its unique features, including a stone spiral staircase, and limestone bricks.

A museum and a lighthouse spectacular all in one, tours of the Cape Schanck Lighthouse are available daily, and visitors can even stay overnight in some of the old lighthouse buildings. 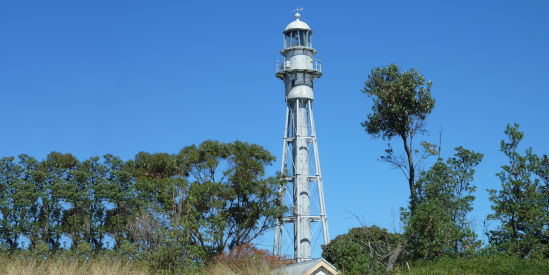 Also known as the South Channel Lighthouse, the Eastern Lighthouse is located within a foreshore reserve at McCrae (between Dromana and Rosebud) on the Mornington Peninsula.

This steel tower lighthouse rises to a height of 34 metres with a 120 step spiral staircase located within its central column. It was constructed in England during 1874 and was erected on its current site in 1883.

The Eastern Lighthouse was used to guide ships travelling through Port Phillip towards Melbourne. The lighthouse keepers quarters were demolished during the late 1940s and the actual lighthouse was decommissioned in 1994 due to the modernisation of other navigational aids around the bay. 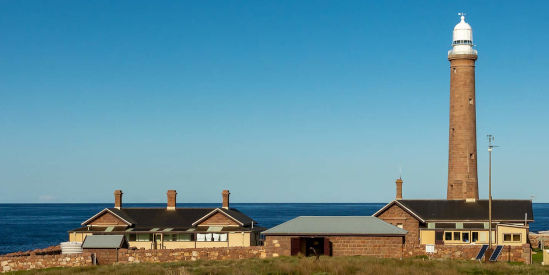 Fashioned out of striking red granite, the Gabo Island Lighthouse is built on a remote island off the coast of Mallacoota, accessible only by sea or air.

Completed in 1862, the lighthouse stands 47 metres in height and is the second tallest in Australia.

Visitors to Gabo Island can also observe the unique population of penguins who reside on the island. 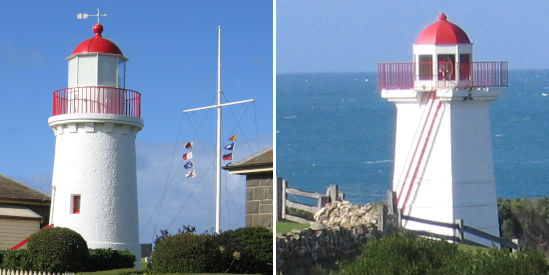 Both the upper and lower lighthouses at Lady Bay are located within the popular Flagstaff Hill Maritime Village attraction in Warrnambool.

The Lady Bay Upper Lighthouse was built in 1859 but later relocated in 1871, stone-by-stone, to the top of Flagstaff Hill where it still stands with the original keeper's cottages and signal station.

The Lady Bay Lower Lighthouse overlooks Lady Bay and was originally built in 1854. It sits lower on Flagstaff Hill than its sister (the upper lighthouse), but also went through a stone-by-stone relocation in 1871 to sneak to a new position further up the hill, where it remains today. It is still operational as a marine navigational beacon. 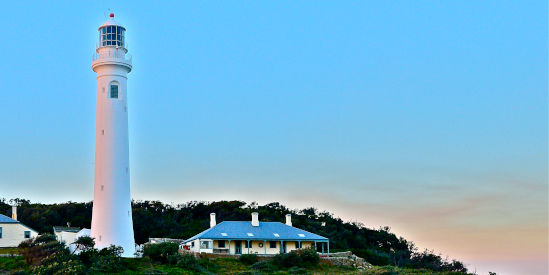 The 1887-built Cape Everard Lighthouse was renamed Point Hicks in 1970 after it was confirmed, despite decades of debate, that the area was where Captain Cook made his first landfall in Australia in 1770.

Visitors to the Point Hicks Lighthouse today can be assured that the remote surrounds remain almost exactly as they were back in 1770, and until very recently was extremely difficult to access due to the rugged nature of the surrounding Croajingolong National Park and unfriendly rocky coastline.

The Point Hicks Lighthouse features a 162 step cast iron spiral staircase built around the central column. It is located in East Gippsland, 46 kilometres by road, part of which is unsealed, south of Cann River. 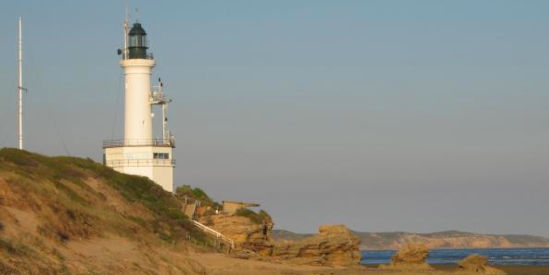 Still very much operational, the Point Lonsdale Lighthouse overlooks the dangerous waters at the narrow entrance to Port Phillip.

The Point Lonsdale Lighthouse was originally built in 1902 and is very accessible, with many visitors choosing to strolling down to it from the town centre of Point Lonsdale. 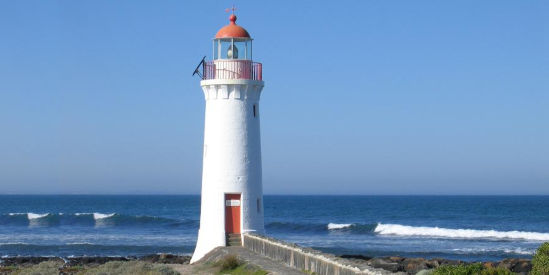 There is no doubt the historic Port Fairy Lighthouse has an element of enchantment. Originally built in 1959 out of bluestone materials, it has guided large fishing fleets safely to shore ever since.

The lighthouse is set amongst the rocky shores of Griffiths Island which is located at the mouth of the Moyne River at Port Fairy and linked to the coast by a short pedestrian causeway. Once on Griffiths Island, it's about a one kilometre hike to the eastern tip of the island to reach the lighthouse.

The original lighthouse keepers residences were demolished in the 1950s. 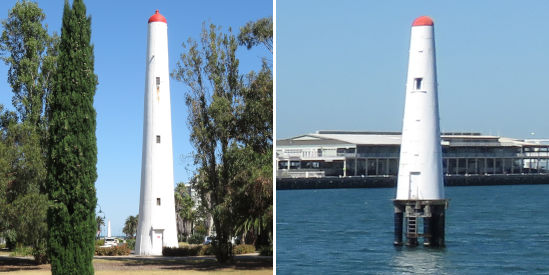 The Port Melbourne Leading Lights consists of two lighthouses that were built in 1924 to mark the centre of the Port Melbourne Channel. This enabled ships on Port Phillip be be guided along the channel to Station Pier.

Both lighthouses are located in Port Melbourne. The rear lighthouse stands 26 metres tall within Garden City Reserve, overlooking the Beacon Cove residential area. Exactly 500 metres south along an uninterrupted vista is the front lighthouse which is 16 metres high and sits offshore, mounted on posts between Princes Pier and Station Pier. 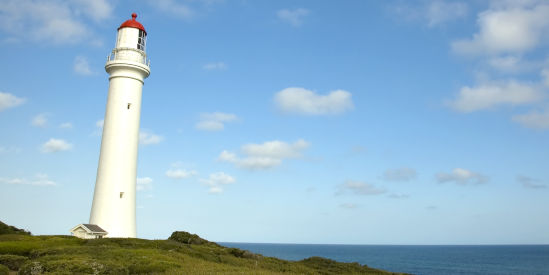 Located at Aireys Inlet along the scenic Great Ocean Road is the Split Point Lighthouse, affectionately referred to as the "White Queen".

Originally constructed in 1891, the lighthouse is somewhat perilously situated upon the rocky outcrop of Split Point, with breathtaking views across the rugged coastline and bushland of the Otway Ranges.

These days, the Split Point Lighthouse is a popular tourist stop and the two original keeper's cottages still remain. Guided tours for interested visitors are available. 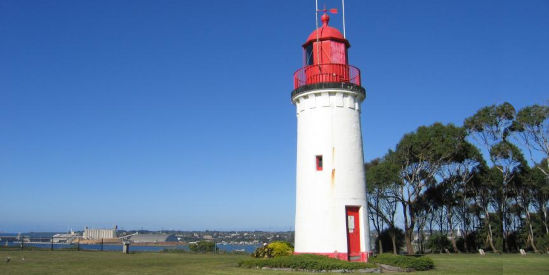 Perched over the treacherous Whaler's Reef in Portland Harbour is the Whalers Bluff Lighthouse which has been operational since 1859.

The original lighthouse was built closer to the Bluff, but was painstakingly relocated stone by stone in 1889 to its current position, so that it was less vulnerable to hostile attack. It stands 12 metres in height. 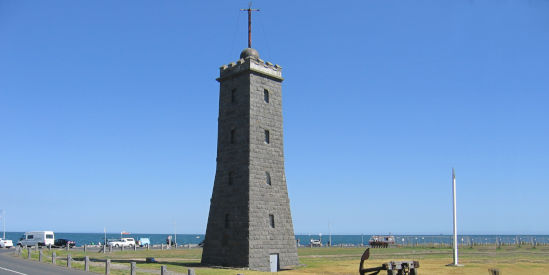 Located in historic Point Gellibrand Coastal Heritage Park at the inner Melbourne suburb of Williamstown is the Williamstown Lighthouse, also known as the Timeball Tower.

It began its life as a typical lighthouse in 1840 and was believed to be the first maritime navigational aid in Victoria. The tower was refashioned in bluestone a few years later. In 1853, a "time ball" was established at the lighthouse so that ship masters could correct their clocks at the fall of the ball at 1pm each day.

The historic Williamstown Lighthouse has undergone several renovations over the years, including an extension which was subsequently demolished.

These days, the lighthouse stands 27 metre high and a replica of the original time ball mechanism was reinstalled and operates by computer, dropping daily at 1pm. 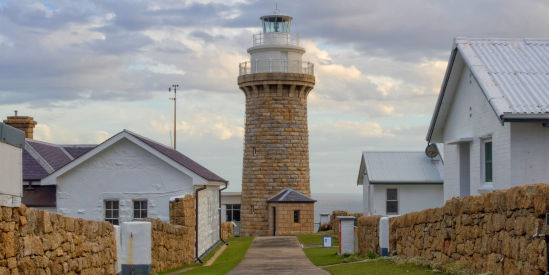 The Wilsons Promontory Lighthouse is the most southerly lighthouse on the mainland of Victoria and views of the narrow shipping channel below its shores are nothing short of breathtaking.